and how The Windsor Station came to be…

It was in June of 1777, that 72 delegates met at the Windsor tavern of Elijah West to discuss statehood and draft a constitution. Groundbreaking for its time, it prohibited slavery, mandated universal manhood suffrage without restrictions, and established a public school system. Vermont existed as an independent republic until 1791 when it became the fourteenth state. The term “Vermont” was also born of these constitutional meetings. The name was changed to honor the region’s prominent natural feature, the “vert mont” or “green mountains.” That historical tavern is known today as the Constitution House, and still welcomes visitors on Main Street to convey the exciting early history of Vermont.

Windsor remained the part-time capital of Vermont until 1808. Therefore, this small town attracted a large contingent of lawyers and other officials to run both governments, and the settlement expanded. Shops and hotels such as the Windsor House catered to travelers. As manufacturing opportunities expanded, so to did the options for moving goods across the region and nation. State leaders began to explore options, and meetings in the 1840s roused interest in the railroad. In 1843, the legislature chartered the Vermont Central Railroad (VC) to traverse the state. The track along the Connecticut River was opened to traffic in 1849.

After the original station suffered extensive damage in a fire, the Central Vermont Railway built this present Windsor depot in 1900, opening its doors on January 1, 1901.  The wide overhang was designed to protect passengers from inclement weather as they waited on the platform for the arrival of the train. The trackside bay (our Station Master Dining Room), canted with windows on all three elevations, gave the station master an unobstructed view down the right-of-way so that he could monitor traffic on the rails. To the north, a wide canopy (outdoor dining space) extended from the station along the platform to shelter workers as they transferred baggage and parcels from the trains to the freight room (our current kitchen). Barre granite from Vermont was used for trim such as the window sills. Built to a standard design costing $10,000, the rectangular depot featured separate waiting rooms for men (our barroom) and women (our main dining room) that reflected Victorian sensibilities about the mixing of the sexes in public places. Birch veneer seating, electric lights and a hot water heater completed the thoroughly modern interior.

Windsor Station was a fully operating train station until the mid-1960’s.  It closed down and eventually was left empty. In 1976 the train station once again became alive and was restored and converted into a restaurant.  We have the privilege to share these storied walls with travelers and diners of the past. We sincerely hope you enjoy your visit the Historic Windsor Station and remember to raise your glass to our glorious past. 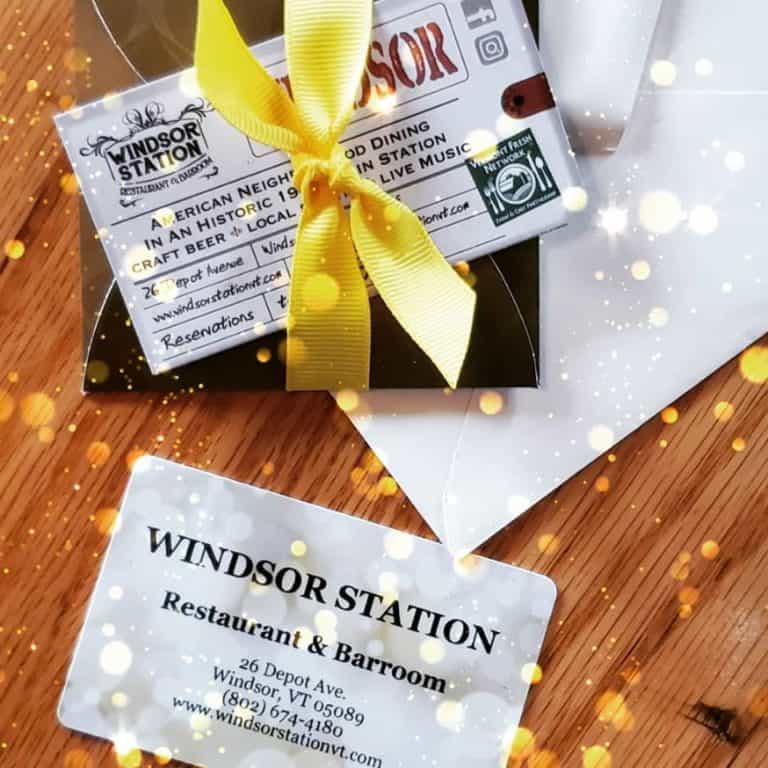 “How do you put into words the atmosphere, ambience and quality of the food and beverages. Cold beers about 8 or ten on tap with dozens more in can and bottle. Locally made liquor as well as beer to make up their alcohol list. Great Bolognese on Tuesday with a side salad. ,Got the Alfredo dish on Wednesday and had a hard time finishing all of the food. Great value for your dollar. Can’t wait to come back.” — Jeffery Hale

THE RESTAURANT WILL BE CLOSED ON SUNDAY, NOVEMBER 27th. DUE TO ILLNESS WE ARE SHORT STAFFED.